More often than not, when I tell people I am a high school math teacher, the response I get sounds something like “Wow, that sounds awful. I hated math in school” or “Oh. I am so bad at math!”

At the very beginning of each school year, I give my students an assignment called “My Mathematical Biography.” This assignment includes questions about students’ past experiences with math, expectations for the coming school year, feelings about math in general, and more. Some students put a great deal of effort into this assignment while some answer each question in only one or two sentences. Regardless of the effort a student puts into the biography assignment, I have found the relationship between a student’s success in my class and the answer to the first biography question to be very interesting. The question reads as follows: Overall, how do you feel about math? Have you always felt that way, or were there specific experiences or moments that have given you that feeling? If the latter, what were they, and why were they important?

Negative feelings about math are often traceable to a previous teacher or class, but a positive relationship with math often is credited to parents or siblings.

The two most harmful attitudes to portray to children as a caregiver are either: you hate math and just aren’t a math person so that means they probably won’t be either or math has always come easily for you and it’s not hard so your kid shouldn’t be struggling with it. Both of these portrayals ignore the fact that each child has his/her own potential for success in math. My experience as a teacher has shown me that attitude and perseverance have just as much impact on success in math as predictive test scores. So how can you, as a caregiver, make sure that your child develops a positive attitude towards math?

Fostering a positive attitude towards math and mathematical concepts allows students to reach full potential in each class and become a strong math student from early childhood through adolescence and early adulthood. 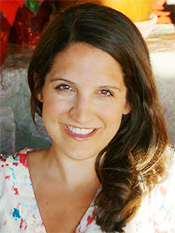 Sasha Fajerstein is a math teacher at New Trier High School in Winnetka, Illinois—one of the highest ranked secondary schools in the nation. This pioneering mathematics educator, who is passionate about integrating new teaching methods and technologies into the classroom, recently collaborated with her colleagues at New Trier to develop and pilot an interactive high school geometry textbook for the iPad. She co-presented a talk about the iPad textbook project at the 2015 Illinois Council of Teachers of Mathematics Conference and also shared her insights into math education as a presenter at the Metropolitan Mathematics Club of Chicago. After earning her B.S. in mathematics from the University of Illinois at Urbana-Champaign, Sasha spent a year teaching English in Costa Rica. Upon returning to the U.S., she served as a math teacher at Nichols Middle School in Evanston, Illinois.